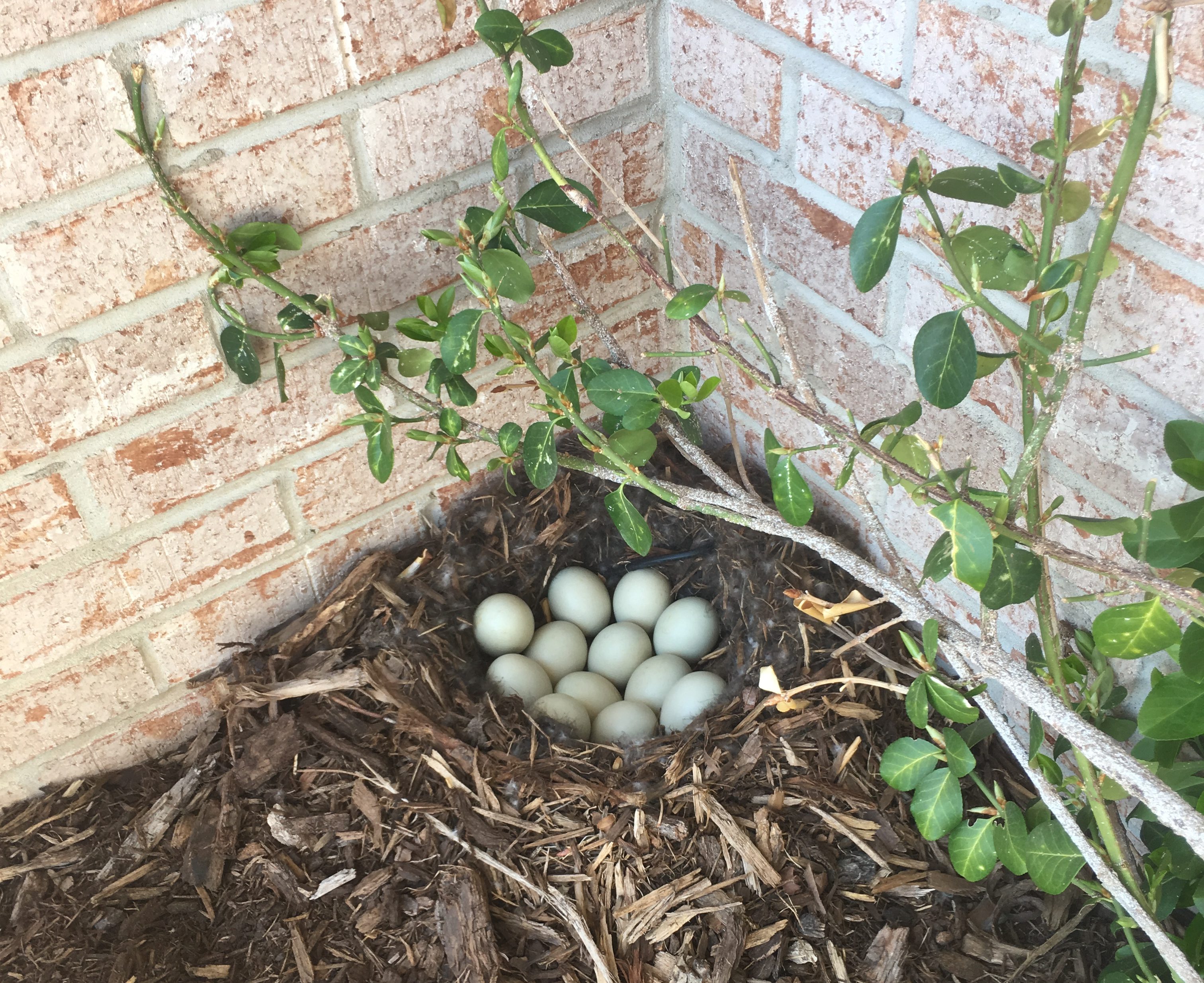 Spring has finally sprung in Wisconsin (sighs of relief all around)!

This past weekend, as the kids were playing outside, my oldest daughter made a surprising discovery. Next to our garage, bordered on two sides by the brick walls of our house, was a fluffy nest made of mulch and feathers. In the center were a dozen pale green-gray eggs.

A little while later, two mallards – a male and a female – made an appearance in our front yard. They stood together on the grass a short distance away, as if conferring on whether or not we could be trusted. Soon, the hen waddled cautiously over to the nest and settled in for the evening.

Yes, we have a nesting mama duck in our yard! If we’re lucky, we might see the ducklings in early June.

Though our whole family is fascinated by our new visitor, we were at first perplexed by her choice of location. Since the nest is only a few yards away from our garage, mama duck will have to endure the daily clanking sound of garage doors opening and closing, not to mention vehicles driving in and out. Perhaps this duck is accustomed to the soundtrack of suburbia, but it can’t be the most pleasant environment in which to prepare for raising a dozen babies.

When my kids were younger, one of their favorite shows was “Peep and the Big Wide World,” which features an abrasive, outspoken duck character named Quack who likes to boss everyone else around. In one episode, Quack proclaims, “You can’t question duck wisdom!”

Over the past few days, as we’ve watched our feathered friend settle in to her surroundings, we’ve started to think that perhaps there is some truth to Quack’s claim. I did some research online and learned that ducks often build their nests in seemingly random places, but they usually have good reasons for doing so. The ability to hide from predators is a key consideration.

Indeed, our mama duck blends in so well with the surrounding mulch that at times, she is almost indiscernible to us. We’re beginning to understand her strategy of remaining perfectly still whenever we are nearby: if we can’t see her easily, neither can potential predators. If she is startled by our presence, she does not show it. Occasionally, I see her eye open, peering at me. In the evenings, she leaves the nest briefly to stretch her wings, usually accompanied by the dad, who I hope will hang around for a bit. 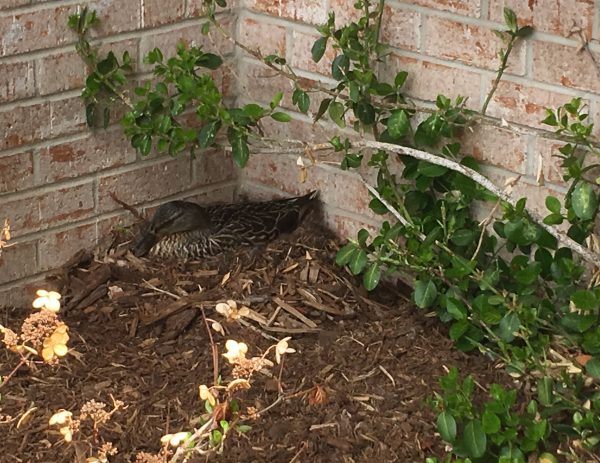 While I’ve been tempted to offer our new mama more amenities – food or extra nesting materials, for example – I’ve read that it’s best not to interfere with the nesting process. The mother duck knows what she needs and how to get it, and putting out food can attract predators. I did make a “Caution: Nesting Duck” sign to remind curious human visitors to keep their distance.

Watching this mama duck so far has been a bit like motherhood: sometimes the biggest challenge is taking a step back and trusting the process, instead of trying to control it.

I’m looking forward to seeing what the next few weeks bring for our visitor!

Update, late May 2018: I returned home from an afternoon errand to find the nest strewn with broken eggs, and no sign of the mother duck. I poked around carefully and found two whole, unharmed eggs. One was buried quite deeply in the mulch. But without mama duck around, they wouldn’t stand a chance. Even if I incubated them myself, who would teach them to quack, swim, and eat?

After a few days, I resigned myself to the sad reality that the mother duck would not return. The manager at our local bird food store theorized that perhaps the duck was spooked by a predator (possibly a crow) or something else. He reassured me that she likely had already started a new clutch elsewhere. Later, I learned that the duck nest success rate (the percentage of nests where at least one duckling hatches and grows to flying age) hovers around 20%, sometimes even lower. I wish the odds had been better for our duck visitor, but I’m grateful she shared part of her story with us.