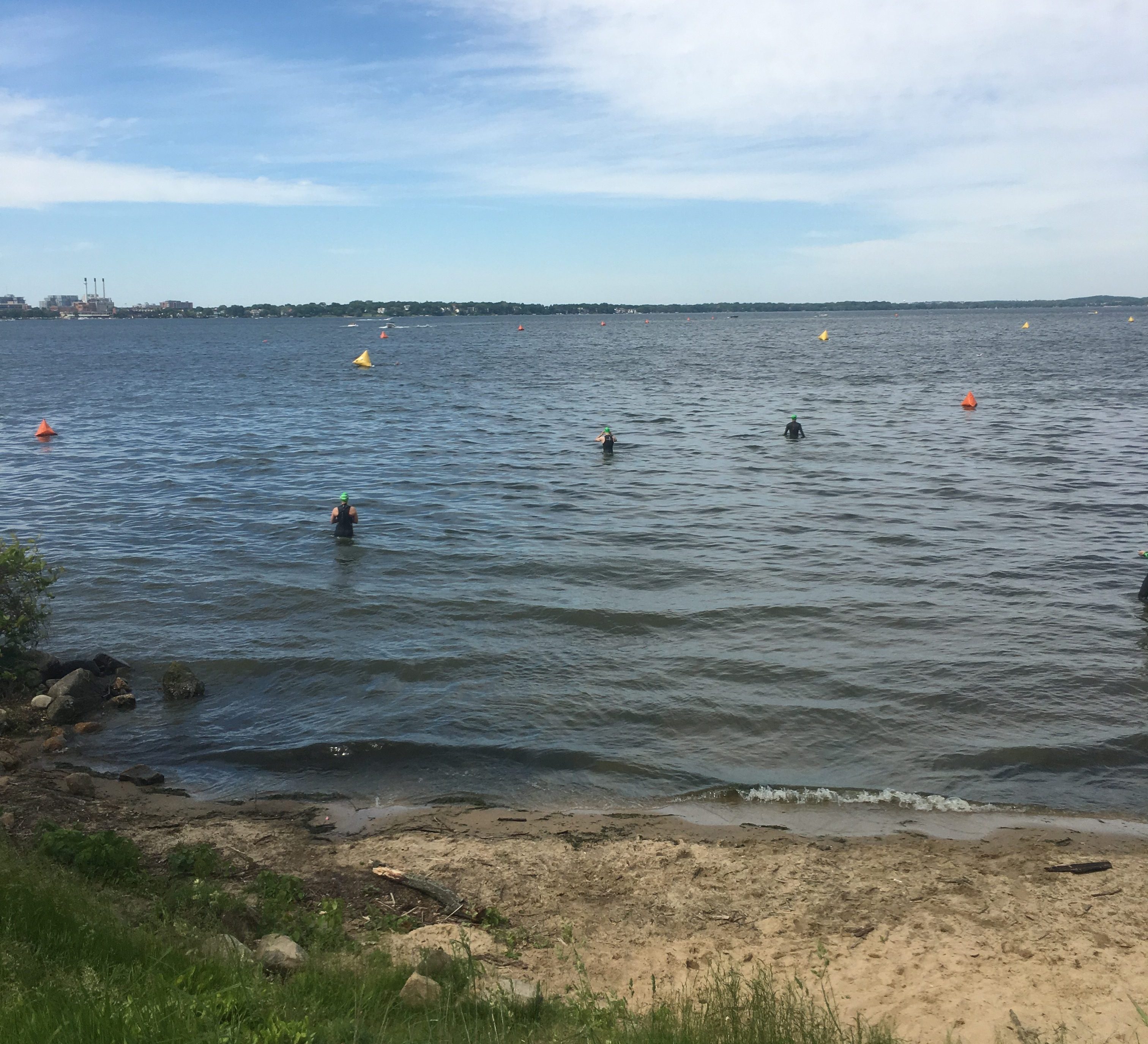 On June 9th, I rose before my 4:30 AM alarm with a mixture of excitement and trepidation buzzing through my veins. In a few hours, I would join 2,500 other wetsuit-clad competitors for a dip in the glistening waters of Lake Monona — the starting point of the Ironman 70.3 Wisconsin triathlon. After the 1.2-mile swim, most of the other athletes would go on to complete two more segments: a hilly, challenging bike and a grueling half marathon.

While I respected and admired those who were going the full distance, I had no such ambitions. I wanted to focus solely on the swim, so I’d joined up with two other female athletes to form a relay team. After the swim, I would happily pass the baton (or in our case, the timing chip) to my relay teammate who would race the 56-mile bike segment. Then our runner would complete the final 13.1-mile leg.

The pre-race atmosphere of an endurance event is an experience in itself. Weaving through throngs of athletes in fancy tri-suits, I stopped to be body marked by an Ironman volunteer, then navigated the enormous section of racked bikes to find our team’s spot. Nearby, long lines were forming at the porta potties, and a distinctly putrid scent wafted into the air. “Smells like nerves,” quipped one athlete to his buddy as they walked ahead of me.

Minutes later, I’d successfully wrestled myself into a wetsuit and joined the queue of swimmers on a ramp that would lead us into the water. Orange and yellow buoys bobbed in the distance, marking a rectangular course that we’d follow. The adrenaline that had powered me all morning was beginning to fade, giving way to a drowsiness that reminded me I was operating on a few hours of broken sleep.

The race organizers made a few announcements, then pumped up the music as the final minutes ticked down. As the starting gun sounded, the first swimmers entered the water, cutting through the waves with decisive strokes. Unlike the traditional mass swim start that’s a hallmark of other Ironman races, in this event, swimmers were instructed to self-seed by expected finishing time. We’d then enter the water via a rolling start, four at a time, in an effort to minimize crowding.

Down the ramp I tiptoed, finally feeling the nerves that I’d thus far eluded. My knees shaking slightly, I suddenly felt like an unsuspecting lamb or cow being led cheerfully to a ghastly fate. The brightness of the morning sun, the upbeat music blaring in the background, and the rhythmic, near-constant beeping that summoned participants into the water reminded me of a bizarre assembly line, in which whatever awaited us at the finish was a mystery.

Faced with the immediacy of the task at hand, I felt a mini wave of nausea rising in my throat. The logical part of my brain began sounding a warning. What the hell am I doing?

A smiling volunteer directed me into my chute, the second from the left. The four competitors in front of me jumped into the water. Gripping the metal aisle divider, I waited for my turn.

Four long beeps sounded. I waded in, letting the water rise above my feet, ankles, and calves, windmilling my arms to get some momentum. In my head, I cued up “Bad Liar” by Imagine Dragons. As my feet lifted off the gritty sand, I stretched forward and started swimming. I felt my competitors’ arms and legs grazing me as they jockeyed for position. Their movement created waves, and I got a couple mouthfuls of lake water.

When you train mostly in pools, you don’t realize how much you rely on that tidy black line at the bottom until you no longer have one. Looking down, I glimpsed nothing but murky darkness. No fish, no seaweed, no sand. Nothing. I lifted my head out of the water every few breaths to see where I was headed. Stroke, stroke, stroke, breathe. Stroke, stroke — look up. Despite my efforts to swim in a straight line, I found myself frequently drifting to the right.

I did a lot of swimming growing up, so I felt safe in the water. But the closeness of the other competitors and the inability to see clearly were disorienting and a little scary.

Just as I was getting into a decent rhythm, a rogue foot smacked me in the mouth with surprising force. Instinctively, I ran my tongue across my teeth and lips; everything seemed to be attached still, so I kept going, albeit more cautiously.

Lifting my eyes above the water line, I could see clusters of swimmers ahead of me, their brightly colored caps purposely visible to race organizers. To my left were the sighting buoys — I knew to expect one every 100 yards, and that they would change color, from orange to yellow, once I hit the halfway mark. To my right were kayaks and lifeguard boats. While I couldn’t see the lifeguards’ faces, I was glad to know they were watching me.

Finding the optimal position in an open water race is a tricky endeavor. I quickly learned that swimming close to the buoys on the left is the most efficient route. But because lots of swimmers cluster near the buoys, there’s also a greater risk of kicks to the face.

When it came time to make the two left turns that would lead me back to the beach, my goggles were fogging up. I struggled to stay close to the buoys. For a second, I worried I might drift off into some far-flung corner of the lake. Who would then retrieve me? I mentally calculated the number of yards I had left. 800? 600? Each time I passed a buoy, I felt jubilant. Almost there, almost there.

My excitement was marred by another collision with a fellow swimmer on my left. This time, my goggles were knocked loose, causing me to momentarily see stars. Even though I knew to expect this type of incidental contact, I felt a burst of anger towards my anonymous aggressor. On the plus side, it motivated me to swim a little faster.

The exit ramp was in sight. Algae clung to my face and arms, and I felt a distinct temperature change as the water grew warmer; now I was close. I kicked harder, and finally my fingers felt sand. I stood up, holding my arms out for balance on the slippery mat, and began running along the exit chute that would take me to the transition area. My breath was coming fast and my legs wobbled, but I didn’t stop until I reached the relay tent where my teammate was waiting. A quick transfer of the timing chip, and she was off — and my portion of the event was done.

I didn’t learn until later that day that two gentlemen had medical emergencies during the swim and were pulled from the water, one just several minutes after I finished, and the other around an hour later. Sadly, both athletes died following the event.

Had I been near these competitors in the water? Would I have noticed that they were in distress?

The race organizers were conscientious about safety. I felt reassured by the number of lifeguards I saw lining the course. I have no doubt that staff got to the athletes quickly, but I wonder how long it took to recognize a problem was occurring. Drowning does not typically look like what we see in a dramatic movie: arms waving, flailing, shouting for help. Instead, people who are drowning are often quiet, aren’t using their legs to kick, and become vertical in the water.

The chaos of an open water race complicates the situation. If you get tired, you can’t simply hang onto the wall (like in a pool), or scoot over to the side of the road as you would during a bike ride or run. And there are so many people in close proximity that it can be hard to pinpoint one person who might be struggling.

This is why problems during endurance events occur overwhelmingly during the swim portion. Race organizers are painfully aware of this. To their credit, they have made positive changes to improve safety, like offering a pre-swim warm-up (so that entering the water during the race isn’t as much of a shock) and utilizing a rolling start.

Even with these changes, we can’t completely eliminate the risk that comes with competing in endurance events. But I think more could be done to ensure safety during the swim segment.

For example, should race organizers outfit each athlete with a GPS-enabled heart rate monitor that would immediately notify medical staff in the event of a problem? Could races limit the number of participants even further and/or stretch out the rolling start to reduce the number of accidental collisions in the water? Should races require each participant to undergo rigorous cardiac screening and testing in advance? What about a pre-event swim test as a condition for participation?

Are these strategies extreme? Are they even feasible? Moreover, how much of this responsibility for safety rests with race organizers versus individual competitors?

I don’t know the answers, but these are conversations the endurance event community should be having.