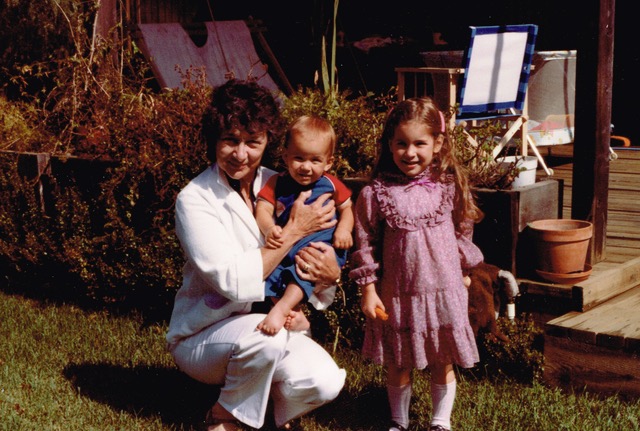 With the holidays approaching, many of us are getting ready to visit relatives. For some, this means packing our bags and hopping on a plane; for others, it means hopping in the car and driving across town.

My parents both came from the Chicago area and moved to California shortly after getting married. This was a bold move at the time; my mom’s father, in particular, warned them about navigating “that treacherous highway.” When I was growing up, visiting my grandparents in Illinois was a special event. My siblings and I always eagerly anticipated the fun plane ride and at least a few days free of school.

Going to see my dad’s parents meant staying at their Western Springs home, a place that always felt magical to me, surrounded by trees and within easy walking distance of the park. On decent weather days, we’d push open the sliding glass door to the small backyard, inevitably startling a bunny or two. We’d hop over the waist-high fence and walk to the park, where my grandparents would push us on the swings or bounce on the squeaky seesaw with us.

When it was too cold to go outside, my brother, sister, and I would play for hours with the pachinko machine in the basement. Our thumbs turned red as we attempted to fling tiny steel balls at precisely the right angle for a maximum score. We’d create our own games, too. A laundry chute on the first floor of the house provided a delightful tunnel for transporting toys to the basement. If we were feeling brave, we’d perch on our grandpa’s fancy recliner in the living room and see how long we could go unnoticed before the inevitable reprimand: “Who’s sitting on grandpa’s chair??” 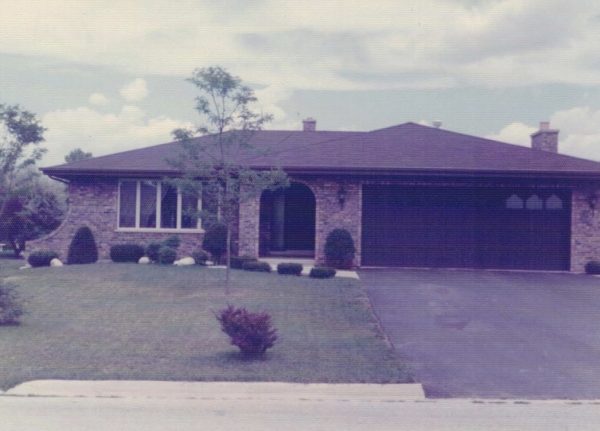 My grandpa never seemed to run out of one-liners, fascinating stories, or mnemonics. Because of him, I still know random but impressive-sounding details, like the fact that Prussian blue is Ferric Ferrocyanide. I’ve also retained plenty of his jokes – some innocuous and some decidedly less so. My grandma was the foil to my grandpa, her sweetness perfectly offsetting his sharp humor. An exceptional baker, she was fond of powdered sugar, and her chocolate chip cookies were legendary in the community. She was also a wonderful seamstress who made most of our Halloween costumes, including a snail costume that’s held up remarkably well after three decades (my daughters still like to wear it around the house).

When we visited my mom’s parents, the experience had an entirely different feel and flavor that I relished just as much. My mother grew up in the Milwaukee-Diversey-Kimball District, a predominantly Polish neighborhood in Chicago, but it was the charming little house in Morton Grove, where her family later moved, that we visited when I was a child. I especially remember the kitchen: bright, full of life and noise. There were breakfasts of bacon and eggs, after which the grown-ups would linger over coffee, laughing and injecting an occasional Polish word like szkoda (“what a pity”), while the kids ran around the living room or played in the side yard. My grandparents had an Australian Terrier named Ginger whose habit of playful nipping prompted the frequent rebuke: “Ginny, no biting!!”

Sometimes my grandma would pray the rosary, and I’d watch her running her hands over the beads. In her house, I found no shortage of treasures. One of my favorites was a doll with sad eyes and yellow hair who sat in a chair. You could wind up the chair and it would spin as somber music played. My grandma told me the doll’s back story: She was supposed to be an ice skater who had been injured and could no longer perform. Someone – most likely me – decided later to adorn the doll’s face with red crayon, but it’s the hauntingly beautiful music I remember most.

When we weren’t visiting at the house, my mom loved taking us to her favorite childhood haunts, especially two on Milwaukee Avenue that have since closed. There was Tast-e Hast-e Dog, which served hot dogs with a mind-boggling number of toppings. “It’s a meal on a bun!” my mom would proclaim. Sometimes we’d stop at Gladstone Park Bakery to pick up salted baguettes. A popular offering there was the Texas Bird’s Nest, a flaky, buttery-sweet concoction that always found its way onto my grandparents’ dining room table before rapidly disappearing.

It’s funny how history repeats itself. Just like when I was growing up, today all of my children’s grandparents live a plane ride away from us. Visiting them on their home turf means planning ahead and logging some serious miles.

But no matter how well you plan it, traveling – especially with kids in tow – can be a recipe for stress and frustration. I’ve agonized over the mountains of laundry and other items that need to get done before an upcoming trip. I’ve slogged through crowded airports and grumbled about how much easier things would be if everyone simply lived in the same zip code. I’ve felt frazzled by disruptive “random” TSA screenings and encounters with what I’ve nicknamed the pornographic body scanners. Or, after dealing with an aggravating flight delay or tired-wired children who are up way past their bedtime, I’ve gritted my teeth and sworn to my husband, “I am NOT doing this again. Never, ever!!”

Thankfully, I never mean it. Because someday, I want my children to remember how fun it was to bake brownies with their grandfather in California or do arts and crafts with their grandmother against the backdrop of an Arizona sky. I want them to grow up with the belief that staying connected to their extended family is important, even though it can present logistical challenges. So as long as we can swing it, we’re going to keep taking those trips.

(I’ll probably still complain about those TSA scanners, though.)