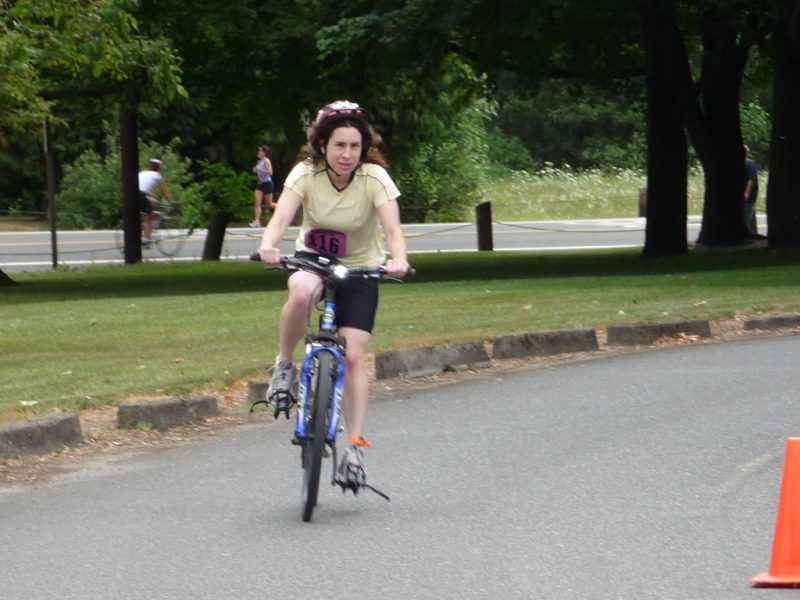 One sweet summer before I became a mom, I completed two sprint triathlons. The first, a lovely event in Corvallis, Oregon, included a 750-meter pool swim, an 11-mile bike ride in the countryside, and 5K run. Admittedly, I did cheat on the run segment (by accident, I swear – I took a wrong turn that caused me to skip the last half of the route!), but the event was still a great experience. I remember the adrenaline that electrified my nerves, how the swim felt almost peaceful as the water dampened all of the noise around me. I loved the little transition area where everyone’s gear was laid out neatly and my bike waited for me like an old friend, ready to carry me over rolling hills, past sleepy neighborhoods to the outskirts of the town. Instantly hooked, I decided to participate in another triathlon a few months later. This time, I completed the entire distance and rightfully earned my plastic laminated finishers’ medal.

That was 2008. This month, my graduating kindergartener turned six, and my “tri” days feel like ancient history. Though I’ve continued running, and even enjoyed some fun races this past year, my pace has never come close to the times I pulled off before having kids. I’ve often wallowed in self-pity over this fact, wondering if it will ever be possible to run with the same speed and ease as I once did. To turn back the clock, show the world that, yes, I may be older and a bit wiser, but I’m just as competitive as before. Maybe I need to train harder, or invest in better running shoes, or study up on the latest techniques espoused by famous coaches. Or maybe, just maybe, despite my best efforts, my body just will not go there anymore.

Running has started to feel stale, an activity I still enjoy but can’t fully immerse myself in without a certain flavor of disappointment. And this must be why, while surfing Google one random evening last month, I started looking into local summer triathlons. While none of the sprint triathlons fit into our family’s schedule, I found a duathlon (run-bike-run) that will be taking place August 1st, practically in my backyard. I researched further and saw that my gym would offer a group training class throughout June and July. The timing could not have been more perfect, as if this event were tailor-made for me.

“I think I need this,” I said to Kevin. He immediately started researching bike racks for the car and promised he and the girls would come to cheer me on at the event. Within days, I had registered for the duathlon and signed up for the training class, which began this month.

At the first session, I met my classmates, whose friendliness put me at ease. My fellow tri participants included a woman slightly older than me, a middle-aged man and his daughter (who happened to be an elite high school runner averaging a 5:30 mile pace). All of us would be participating in different races throughout the summer.

We started off the session with a ten-mile bike ride that took us past a local community college, wide open fields, and spectacular secluded homes. In preparation for the event, I had decided to invest in my very first road bike, and learning to ride it was an experience in itself. The new bike felt incredibly light and almost wobbly, so very different from the trusty, no-frills mountain bike I had owned for more than ten years. As we started the ride, my legs spinning and spinning as I tried to find a comfortable gear, my thoughts raced just as wildly. Why are they going so fast? Is it normal to be this tired after only 30 seconds of cycling? Oh, this was a mistake…and – OH my God, I’m one of THEM now, I’m one of those crazy cyclists I always see coasting down the roads. Well, minus the rock-hard abs and fancy jersey, of course.

Though I was bringing up the rear for most of the bike ride, once I settled in, I began to enjoy the experience. And I started to understand what motivates those “crazy” cyclists to get outdoors and brave the open road, where the demands and cares of daily life fall away and for a blissful string of moments, you can just be a person on a bike. All I needed to do, all I really needed to accomplish was to keep my legs going while making sure not to lose sight of the other riders in front of me.

When I focused on this simple goal, all of my senses seemed to be at their sharpest. We passed broad swaths of farmland and I giggled when I saw horses wearing what looked like cozy embroidered sweaters. The wind whipped in my face and whooshed past my ears, and I lost count of how many bugs I swallowed. The scent of lilac enveloped me with its sweetness. The moon was full and pasty white against the early evening sky. (The “day moon,” my kids and I like to joke.) In the background, the soundtrack was an ongoing chorus of red-winged blackbirds, their song a single note that is both mournful and unapologetic, a sound that forces you to listen. As if to say, “I am here. I am alive.”

My little bike did not disappoint me. It felt so light and nimble, its thin frame and tires providing only a small barrier between me and the ground. With minimal insulation from the earth whizzing below, I felt every bump and rock on the pavement, a sensation both thrilling and terrifying. Every jolt in the road made me gasp as I feared I would fly off the bike and smash into the concrete beneath the pedals. And I felt a sense of terror that perhaps only a parent can understand, the fear of getting seriously hurt and not being there for my kids.

As our ride continued through a peaceful lakefront neighborhood, the aroma of a summer barbecue filled the air and suddenly transported me back to 25 years ago, to some campground in California. In an instant, I was 10 or 11 years old, hanging around a tent, my skin and clothes tinged with a light layer of dust and campfire smoke. There was laughter, there was food to eat that probably came from a can and tasted delicious. My mom, dad, brother and sister were there. I don’t know where “there” was exactly, only that it happened. The body remembers what the mind can no longer grasp.

When we finished our bike ride and transitioned to a run, I looked with envy at the high school athlete. She had handled the bike segment so effortlessly, keeping pace with our trainer for most of the course, and now sauntered ahead of the group as we jogged behind her. At that point, my legs felt like one of those wiggly snake water toys we used to play with growing up, and I was mildly concerned that I had peed my pants. I had to admit that I felt slightly bitter watching this girl, with her tan, glistening skin and dazzling smile that came so easily, which I interpreted as the sign of a carefree mind. She was just so young, her body so full of pure energy, not grizzled and gnarled by years of caring for children, of health catastrophes both big and small, or the weight of too much swallowed resentment.

Yet there’s a richness and a complexity to the years that separate this girl and me. People and experiences that I’d never trade, because I couldn’t imagine my life today without them.

Yes, the past is so comfortable, so achingly familiar and safe, like the cozy blanket you drape across your legs when settling in to watch your favorite Netflix series. And when we focus on what we’ve lost – fitness, youth, a sense that nothing scary can happen to us – the past always seems infinitely more appealing than the present. But we can’t turn back the clock. We can only move forward.

I’m still nervous and excited about the duathlon, and the training leading up to it. So, yeah, I might look into buying some elbow and knee pads and a super upgraded titanium-reinforced helmet (do they even make those??) just for fun. And I’ve resolved not to beat myself up mentally if I need to stop and take a breather during the event. But I’ll stay committed and keep working toward my goal. Because whatever it has awakened in me might just be a part of the past that I can take with me. 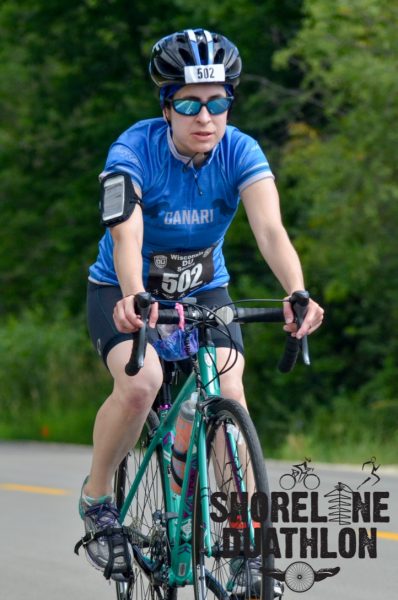 Postscript, September 2015: The duathlon was an excellent experience! As I summed it up to friends, I met two important goals: (1) I survived (finished), and (2) I did not come in last! Even better, now I have a third medal to proudly showcase in my collection.